James Hawkes took his terrier, Spot, for a walk. It was a cloudy Sunday, February 6, 1938, and it had probably either just stopped raining or was about to start. Hawkes lived at 9203 Third Avenue, in a building long since torn down. Despite the weather, the 15-year-old planned to walk almost a mile; he made it 3,000 feet before his plans changed.

He very likely headed down 92nd Street—past Ridge, past Colonial, to Shore Road, where he turned left and came back up Oliver Street. There, in front of 9269 Shore Road, what the newspapers later called a “fashionable” apartment building, he “noticed [a] woman’s stockingless leg sticking out from the rear door” of a two-door Pontiac sedan parked at the curb, the Buffalo Courier Express reported. He peeked inside—and saw two corpses in the backseat. He ran into the building and told an employee, who phoned the police.

The dead were Nino Columbo, 42, and Christina Oliveri, 24, both whom were married—but not to each other. Oliveri was found “lying on her side,” the Times reported. Columbo was “hunched over her on his knees. Both were bruised and blood-stained. The bodies had been covered with an oblong piece of pale green oil cloth, figured profusely with tiny identical dancing couples.” (Police thought this unique item might be their best clue, but it doesn’t seem that anything ever came of it.)

The woman…wore a black dress beneath a green overcoat with a fur collar. A false diamond pin was at the bodice. Her wedding ring had not been disturbed. She had no hat, and a pair of black pumps lay on the floor.

Her coat “was half off and jammed in the closed door of the car,” the Courier Express continued, “as though she had fought to escape when she became aware of her captors’ murderous intentions. Scratches on both indicated they battled to escape their fate. In addition, the rear seat had been wrenched from its place and had partly fallen over the bodies.

“The woman…was nude from the waist down.”

Around their throats were the sash cords that had been used to strangle them, old clothesline tied in sailor’s knots, “wound tightly three times around the necks of each,” the Eagle reported.

Both had been dead for nine days.

Columbo lived at 2305 E. 4th Street, in Gravesend, with his wife, Catherine, and their children, Joseph and Loretta. In the last decade, Columbo’d been arrested 10 times, and convicted twice—he went to Elmira Prison in 1916 for robbery, and to Sing Sing in 1920 for burglary. He was a “two-bit hoodlum,” according to The Great Pictorial History of World Crime, Volume 2, by Jay Robert Nash. He “had been born in Brazil of Italian parents and had immigrated to the U.S. at an early age, and, throughout the 1920s and 1930s, he lived through robbery and extortion, loaning out his services to any New York mob seeking strong-arm enforcers.” His son, Joseph, who “showed no remorse” over his father’s death, eventually became the inept head of the Profaci crime family. (An assassination attempt in 1971 left him in a coma for seven years before he died.)

Nino’s most recent arrest had been for vagrancy, two years before his murder. By the time he was killed, he was known as “a dealer in cheeses and oils,” according to the Times, who spent most of his time at the Dyker Heights golf course, where his friends were primarily women. “The dress worn by the dead woman was part of a sports outfit,” the Eagle added. Many papers referred to him as an “amateur golfer.” A set of golf clubs was found in the car.

Oliveri lived at 1745 74th Street, in Bensonhurst, with her husband, Alfred, and their sons, Frank and Joseph. Alfred, once an embroiderer, had recently been on welfare, since health problems prevented him from working. He told police he didn’t know Nino, but his wife “had mentioned a flirtatious man named Tony, whose face she had threatened to slap,” the Times reported.

She was last seen by her husband on Friday; she’d told him she was going to the movies. When she didn’t come home, Alfred reported her missing to the police, dropped the kids off at his mother-in-law’s (1786 Stillwell Avenue) and moved in with his brothers in the Bronx. Columbo was also last seen that Friday, alone, at a bar and grill at 7324 Eighteenth Avenue. Investigators believed they’d been murdered that night, kept somewhere for more than a week, then moved nine days after the killing, in thick fog, to the spot on Oliver Street.

(Unless the car had been there for days? No one was quite sure, and 18 cops—a dozen patrolmen and half a dozen sergeants—were charged with neglect of duty for failing to have found the car sooner. In fact, a car had received a ticket on Oliver Street for parking overnight, which was then technically illegal if not often enforced, two days before the bodies were found. It’s not clear if the officers were eventually punished.)

“I figured he had been picked up by you guys when he didn’t come home,” Columbo’s wife told police, according to the website Mafia Genius. She said it wasn’t unusual for him to disappear for days at a time, though she said she didn’t know of any affairs with other women. She identified his body. “Brought into the police garage, Mrs. Columbo was shown her husband’s blood covered face,” the Eagle reported. “She took one quick look, cried, ‘That’s him! That’s him!’ and fainted.” She described their marriage as happy.

A simple funeral service was held for Christina Oliveri on February 9, 1938, at Our Lady of Grace on Avenue W, “a few doors away from the home of Columbo.” Her widower carried in their youngest son while the eldest walked along side him. After mass, the funeral procession passed Columbo’s home, where family told reporters Columbo would likely be given a funeral two days later—but not at OLG, the pastor said. (“Priest Forbids Rites to Man in Double Murder,” the headline in the Eagle read.)

Oliveri was buried at St. John’s Cemetery, in Middle Village, Queens, in Section 29, Row G, Grave 113—the same plot where her oldest son, Frank, was buried in 2006. (And right across Metropolitan Avenue from where Florence McVey, murdered on Marine Avenue three years earlier, had been buried; and a little west of where Bay Ridge bootlegger Charles “Vannie” Higgins had been buried; in the same cemetery where Bay Ridge old maid Victoria Muspratt, axed to death in her crumbling mansion, had also been buried.)

“It was generally agreed that Nino had gone one step too far in having an affair with Christina, who was the wife of a ‘made man’ in the Profaci family,” according to Mafia Genius. “She, of course, also paid the ultimate price for her sexual duplicity.” This strikes me as false, however (and kinda sexist). More likely is the theory eventually put forward by police, more than a year later: Columbo was a loanshark, the “most stubborn rival” in that racket of Cassendro “Anthony” “The Chief” Bonasera, “strong-arm ruler of Brooklyn’s shylock racket since the death of Frankie Yale,” aka Frank Uale, the Eagle reported. Oliveri had just been with the wrong man at the wrong time. (As the Eagle had put it the day after the bodies were discovered, “Columbo was apparently murdered by business enemies and the woman killed to silence her.”) Robbery wasn’t a motive; Columbo had $13 on him [more than $230, adjusted for inflation].

Bonasera, a Dyker Heights resident who always gave his address as 7515 Thirteenth Avenue, had once been the subject of an assassination attempt himself, receiving in 1930 bullets to the head, neck and arm. He survived. And by 1939, Bonasera was wanted for questioning in Columbo’s murder, as was his lieutenant, John Oddo, also known as Johnny Bath Beach. The two were close; Oddo was best man at Bonasera’s wedding. They were like “usual suspects” out of Central Casting, rounded up when police needed to look busy. They were arrested often but convicted rarely, and never for serious offenses.

Oddo was picked up near 81st and Columbus in Manhattan in May 1939 on extortion charges. His bail was set at $100,000 [almost $1.8 million, adjusted for inflation], which was lowered to $50,000 on appeal and, two months later, during which time he’d languished in the Tombs, to $25,000, “which the District Attorney’s office said it did not oppose,” the Eagle reported, “with the understanding that Oddo would supply information to the police which would help them to catch up with” Bonasera and another lieutenant.

It’s unclear if Oddo did supply such information; he and Bonasera were eventually convicted of extortion and conspiracy, though neither seems to have served much time for it. We also know that shortly thereafter there was a falling out between the two; in 1947, eight unsolved murders in Bath Beach were said to be from the war between Bonasera and Oddo’s now-rival bookmaking factions; 60 detectives were deployed to stop the violence and bring the perpetrators to justice. 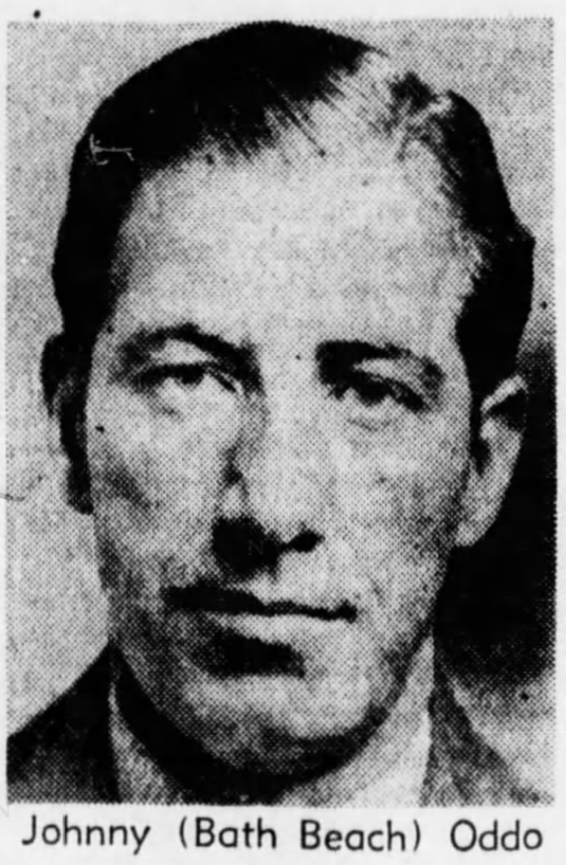 Both men eventually died of natural causes—Oddo, after a career as a capo and consigliere of the Colombo family, in 1975; Bonasera, in 1972.

Almost two decades earlier, in 1953, the United States tried to deport Bonasera, following an arrest in Washington by the department of justice “on charges of engaging in commercialized vice and loan-sharking,” the Eagle reported. But while at that point he had been arrested 25 times, he had received only four minor convictions, and “only one could be construed as involving moral turpitude,” the blog Buffalo Mob explains. “By law, two such convictions were required for deportation.”

“Bonasera was sought for some time as a prime suspect in the underworld execution of [his former boss Frankie Yale, or Uale] but never was officially charged with it,” the Eagle reported. “He was from time to time questioned about numerous other unsolved gang murders, which remained unsolved”—such as the deaths of Nino Columbo and Christina Oliveri, just drops in the bucket in the long criminal careers of Mafiosi like these.

Buy the book True Crime Bay Ridge, on Amazon or from the Bookmark Shoppe