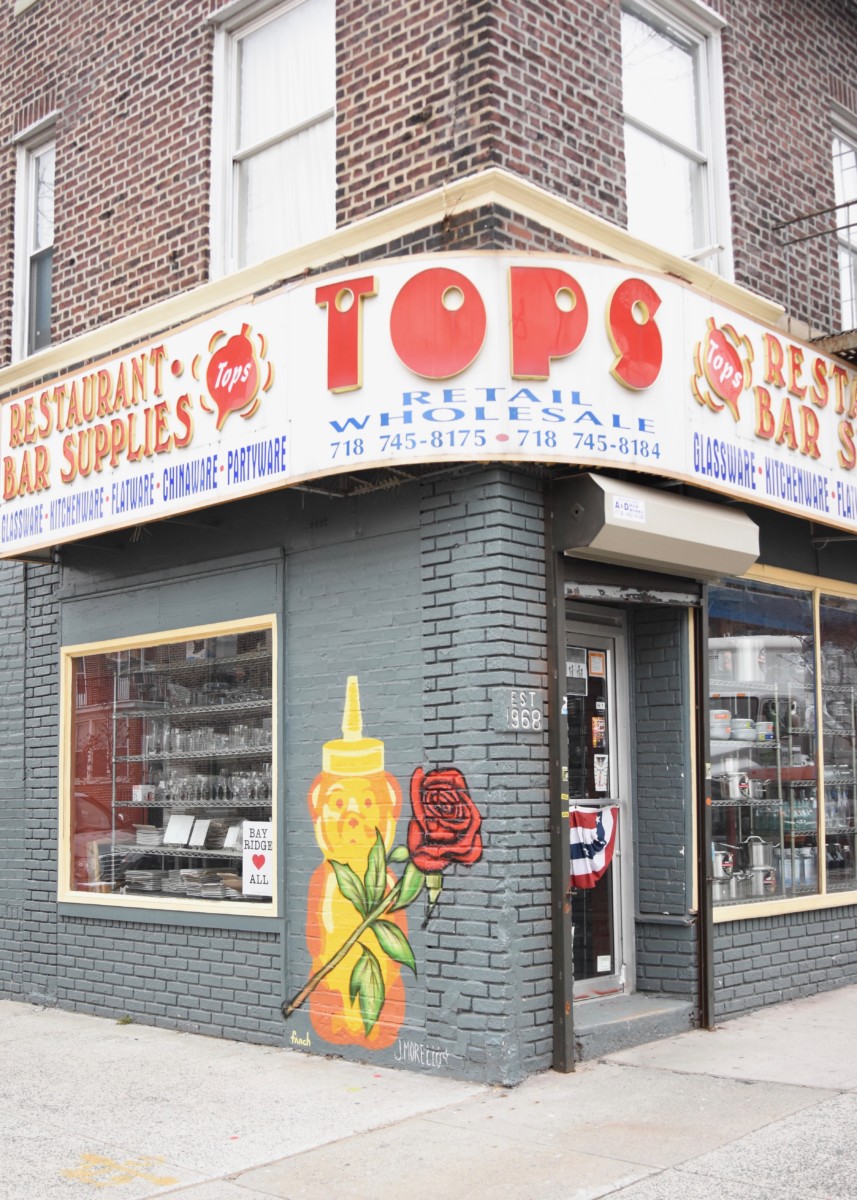 Bay Ridge resident and popular street-artist Jenna Morello was contacted by San Francisco stencil artist Fnnch about his upcoming trip to the East Coast. He wanted to get up in Brooklyn and heard she was the woman to give him a hand. They were introduced through a mutual friend—Cameron Moberg AKA Camer1—and a project came together quickly.

Fnnch is known in the Bay Area for his Honey Bear, as well as other stenciled, colorful pieces that make you smile. By putting them on sidewalks and mailboxes and in parks, he forces you to grapple with the idea that they’re illegal. Should the art stay? Should there be a system permitting artistic expression in these spaces? His style is endearing. You can’t say no.

She took a walk around Bay Ridge two weeks ago and thought about the subject—a honey-bear bottle. What type of brick-and-mortar business would appreciate such a thing on its side? It’s a common kitchen item, but it gives you a warm feeling. As she strolled down Third Avenue, she stopped at the corner of 80th Street. A restaurant supply store!

Jenna walked into Tops and gave them her business proposal. This was not a typical approach for Jenna, but Tops’s reaction was a pleasant surprise. The family that owns it are big street-art fans, and they couldn’t have been happier to be asked to participate in a collaboration. The owner’s daughter Taylor Monier had even spent the previous day chasing the most recent Banksy craze.

“We were so happy when Jenna offered to paint on our store,” Monier said. “As a street art fan, I have been aware of Jenna’s work, but I didn’t realize she lived in Bay Ridge. We love the collaboration with Fnnch.”

On a chilly recent Thursday morning, the two artists mashed-up their styles, and both were happy with the positive reception from the community. “The funny thing about this piece is it doesn’t mean anything, or make much sense!” Morello said. “The image and colors just worked together well, and the dark-gray background. It’s always fun to collab. I learned early on as an artist that you can get away with a lot if you make it look good.”

Erica Stella is the editor of Sold Magazine, a daily online news forum “by artists, for artists.” She has been living in Bay Ridge and documenting street art in NYC since 2012.