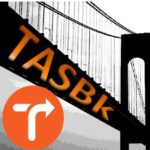 Author’s note: this Saturday (April 21, 2018), the Transportation Alternatives committee for southwest Brooklyn will be organizing an Earth Day weekend social bike ride to Prospect Park along the second route described in this article. The dual-purpose of the ride is to highlight cycling as sustainable transportation, free of the carbon pollution that has placed the climate of the planet on a precipice, while also following one of the easier routes in southern Brooklyn in a friendly group setting.

We’ll meet outside of the office of Community Board 10 (8119 Fifth Avenue), aka Bay Ridge’s Little City Hall, at 11am.

In my role as a Bay Ridge bicycling advocate, I’ve spoken to a few people I would describe as “bike-curious,” or at least a “bike-sympathizer,” but not an active bike rider. From this group, I’ll often hear some variant of this comment: “I used to ride a bike a bit, but I stopped because the streets here aren’t safe.”

I agree! No one should bike some place they don’t feel comfortable. And while the city government has outfitted streets in other parts of New York with safe biking spaces, it has neglected the southern half of Brooklyn.

But while cycling in and out of Bay Ridge using the current infrastructure is challenging, it isn’t impossible, either—if you’re looking to give it a shot, here are three rides you can try, from easiest to third-easiest. 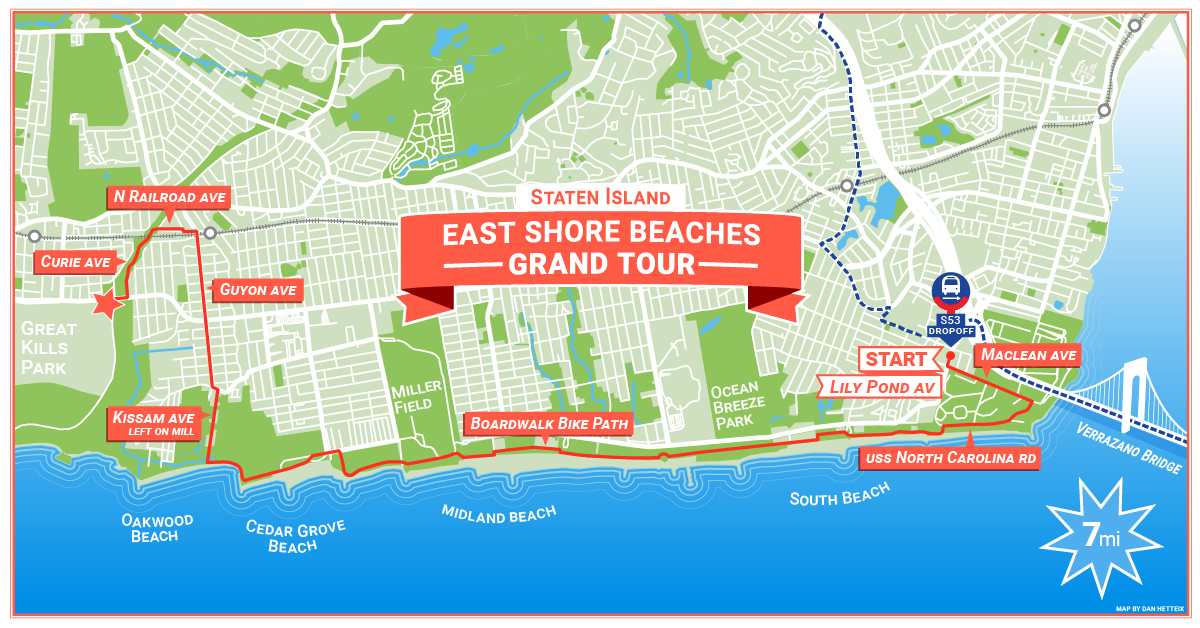 All maps by Dan Hetteix

When to go: Any time

The skinny: About five miles of car-free boardwalk and bike path along the East Shore beaches of Staten Island, with an option to continue on to Great Kills Park over city roads

Getting started: You’ll need to work your way to one of the bus stops for the S53 (Fourth Avenue and 86th St, Fourth Avenue and 90th Street, or Fort Hamilton Parkway and 92nd Street). You can place your bike on the rack on the front of the bus, pay your normal bus fare and ride across the Verrazano Bridge to the first stop in Staten Island. From there, head to the next light and turn right at McClean Avenue, toward Fort Wadsworth. You’ll go past an Army Reserve center, then down a short, steep hill. At the bottom, turn right, continue down and past the campground, and keep going to the barricades across U.S.S. North Carolina Road. The greenway entrance is on the left, and from there, you’ll have clear riding along Staten Island’s best beaches for about five miles.

Where to eat: For a quick bite or sandwich near the Miller Field/Cedar Beach area, I’ll stop off at King’s Deli, on New Dorp Lane and Finley Avenue, or Nino’s Salumeria, at the corner of Ebbits and Roma. They’re not fancy; they are on the good side of Hylan Boulevard.

Asterisk: The blacktop road past Cedar Grove Beach ends and turns into a fairly silty trail. You shouldn’t have any problem traversing this 1/4-mile stretch with a mountain bike or hybrid, but you might have to walk a road bike.

The dodgy bit, and the workaround: To exercise the Great Kills option, you would ride up Guyon from the Mill Road. Up to Hylan Boulevard, the ride is fairly easy, with some low-to-moderate traffic on a wide road. The direct route to Great Kills Park would be along Hylan itself, but this part of Hylan is not casual-cyclist friendly. You could ride along the sidewalk for a half-mile to Buffalo Road—it isn’t legal, but I’d rather take my chances with law enforcement than Hylan Boulevard traffic. (I suppose I can legally walk my bike; I just don’t.) The out-of-your-way-but-legal method is to continue uphill along Guyon and just past the Staten Island Railway and make a left at North Railroad Avenue, at the end of which is a short trail system that leads downhill, back toward the park. The trails are a bit rocky and rooty in some spots, and you’ll have to walk anything less than a mountain bike over those spots, but it will get you around Hylan. 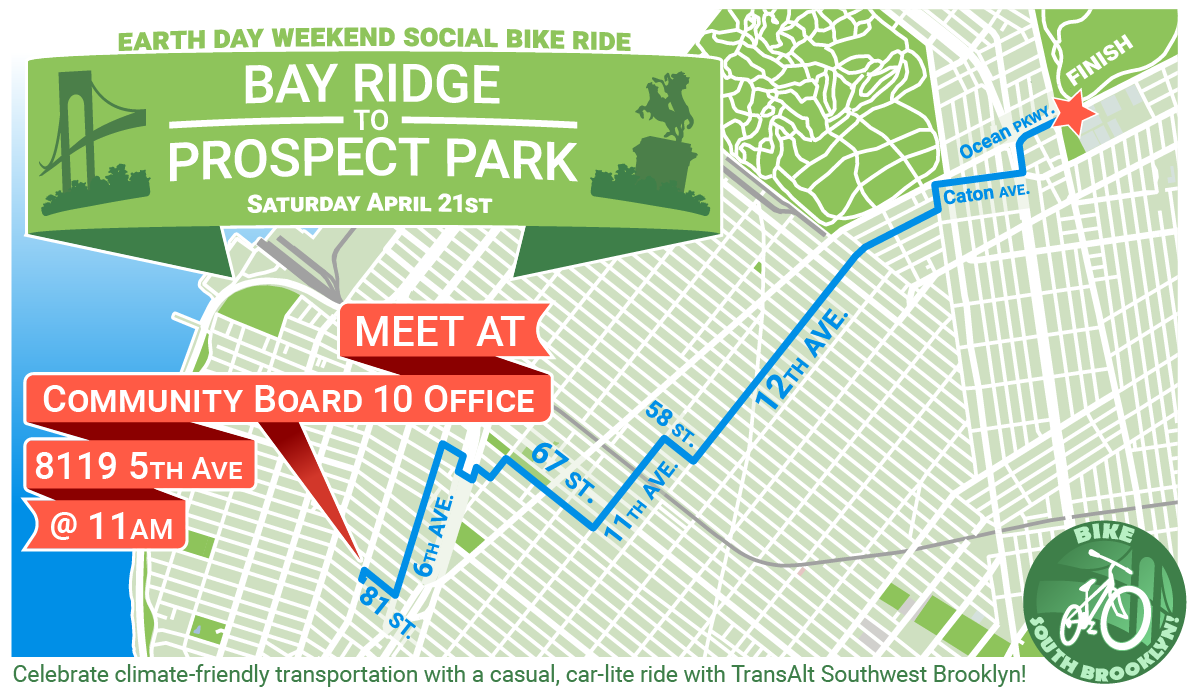 When to go: Saturdays

The skinny: About four miles of relatively flat riding that is also a car-light route… once you get clear of Dyker Heights, that is.

Getting started/the dodgy bit: The hardest part of this route is the start. The jog from the 70th Street bridge over the Gowanus Expressway, and along 67th Street from Eighth Avenue to Eleventh Avenue isn’t so bad. But once you get to Eleventh Avenue, you’ll have nine blocks of ground to cover with cars and trucks before you get to your next turn at 58th Street; it’s one of those spots where a small reserve of courage comes in handy. Unfortunately, neither Tenth nor Twelfth Avenues cross the railroad tracks between 61st and 62nd Streets, and Fort Hamilton Parkway is arguably worse for the vulnerable road user. The timing of the lights at least help keep interactions with cars coming up behind you to a minimum.

Once you get to 58th Street and Twelfth Avenue, you’ll have a smooth ride all the way up to Caton with minimum traffic.

Asterisk: The first block of Caton is weird (technically, you’re supposed to take the middle, straight-through lane, even though the paint is badly faded), but it has a decent bike lane after that.

Where to eat: There are some cafes and a pizzeria on the northeastern end of Fort Hamilton Parkway near Caton Avenue; I recommend Steeplechase Coffee. Brooklyn’s first and finest greenmarket is open Saturdays at the northern end of Prospect Park. There are pretty good connections to the city’s Class 2 bicycle lane network from there, including connections to restaurants on Fifth Avenue in Park Slope. Try the Vietnamese coffee, Saigon on 5th (at the corner of Fifth Avenue and 6th Street).

What else to do: The Brooklyn Museum and central library are accessible through the northern end of the park. The Brooklyn Botanical Garden runs along the eastern side of the park. And of course, there are the meadows, rolling hills, lakes and ballfields of the 526-acre Prospect Park itself. 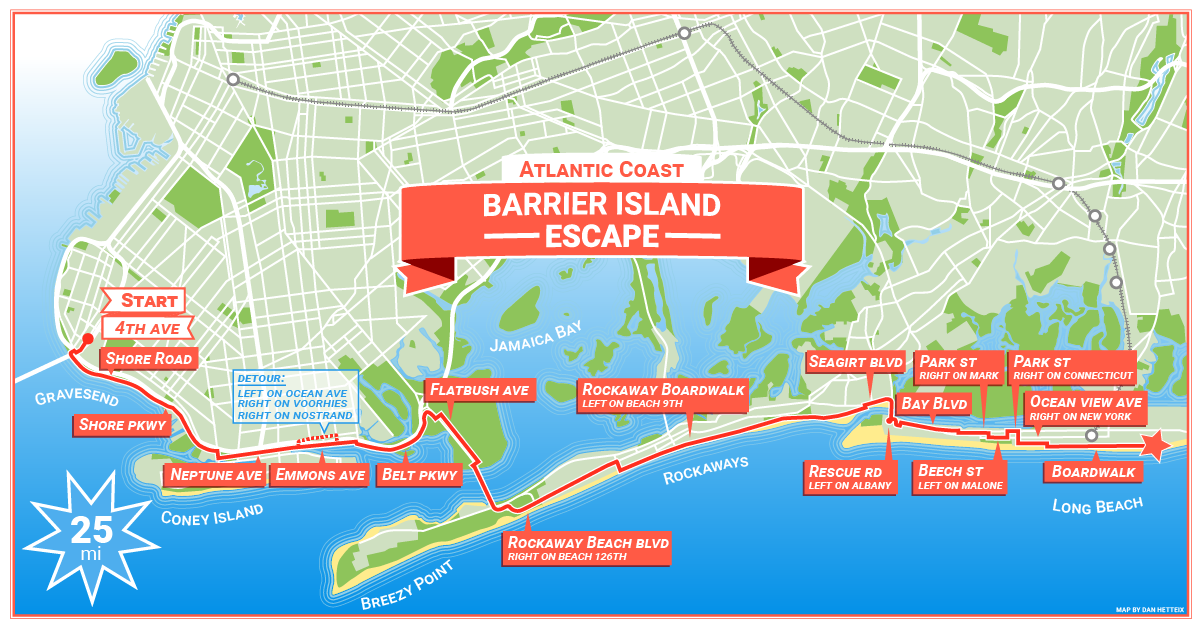 When to go: Early weekend mornings for the full route. If you decide to skip past the sketchy gap in the Shore Parkway Greenway by taking the NYC Ferry, you can do this ride any time or any day of the week (and that’s recommended for the trip back home, anyway).

The skinny: A 25-mile ride that will take you to Jamaica Bay, the splendor of the Rockaways and Nassau County’s westernmost barrier island. If you take the NYC Ferry, your mileage will be cut in half.

Greenway gap is dodgy: The city government has had a plan to close the 4.5-mile Shore Parkway Greenway Gap since at least 2005, but it hasn’t acted on it. In its current state, it’s not fun.

To be honest, this first section is the ride you take when you’re ready to graduate from “casual cyclist” to “casual cyclist with occasional streaks of boldness.” If you’re not there yet, you can still skip to the second half of your Atlantic coast escape by taking the NYC Ferry from Sunset Park to Rockaway (Beach 108th Street).

If you’re game, here’s how to tackle the gap:

The first point of interest you’ll pass is Plumb Beach, which is a nice place to get your zen back. It also has a water fountain built for refilling bottles, and a bicycle repair stand.

Alternate route through Sheepshead Bay: Sheepshead Bites founder Ned Berke writes, “For a history tour and safer (and legal) ride, if eastbound, I’d recommend turning off Emmons Avenue at Ocean, then up Voorhies. Voorhies still has a lot of the summer homes and mansions of beer barons and Manhattan elite. Then back down at Nostrand.”

The main route to the Rockaways is to cross Flatbush Avenue and turn right, toward the Marine Parkway bridge. An alternate route is to stay on the Shore Parkway Greenway after crossing Flatbush Avenue. There’s not as much happening on north side of Jamaica Bay; other than Canarsie Pier, the highway keeps you separated from the neighborhoods you’ll pass, and even the connecting bike lanes through Howard Beach keep you away from commercial districts. On the other hand, you’ll pass the Jamaica Bay Wildlife Refuge visitors’ center on Broad Channel.

Keep going to Long Beach, and one more dodgy bit: Once you reach the eastern end of the Rockaway Beach boardwalk, you can make a short trip down Seagirt Avenue to the entrance to the Atlantic Beach bridge. On the other side, make a right and loop underneath the Nassau side of the bridge and get yourself headed down Bay Boulevard, then Park Street. The two sections of Park don’t connect, so you’ll have get between them using Beech Street. Beech is the Long Beach version of Hylan—avoid riding here. The sidewalk is narrow and well-used, and the distance is only about 100 yards, so this would be a good spot to just walk your bike.

Where to eat: Riis Park has concessions, food trucks and live music during the summer. There are more concessions at various points on the Rockaway Beach boardwalk (mostly, but not exclusively, on the western end of the boardwalk), along with restaurants and cafes along Beach 116th Street (accessible directly from the boardwalk), Rockaway Beach Boulevard (especially between Beach 102nd Street and Beach 90th Street), and Beach Channel Drive at the end of Beach 92nd Street. Also look for Tacoway Beach at Rockaway Freeway and Beach 87th Street. There are more cafes along the Long Beach boardwalk.

What to do: If you rode through the Greenway Gap, reward yourself with a diversion through Floyd Bennett Field before crossing the bridge into Queens. This will take you past hiking trails, an extensive community garden, an archery range, the home hanger for the Historic Aircraft Recreation Project and a remote-control miniature airplane field. Just past the Marine Parkway Bridge into Queens is Fort Tilden, which has some bikeable trails past World War II-era coastal artillery fortifications.

A note about bridges: The Marine Parkway and Cross Bay Bridges to the Rockaway peninsula are run by the MTA, and feature walkways where you are supposed to walk your bike by law. I’ve never seen anyone do it, though I have heard of cyclists getting ticketed from time to time for riding across. The Marine Parkway walkway is five feet across—the same width as a standard bike lane—so if you do ride across, be overly considerate of pedestrians and and cautious around cyclist riding the other direction. The Cross Bay Bridge has a much wider walkway.

The bridge that carries Cross Bay Boulevard from Howard Beach to Broad Channel has a bike lane… a standard bike lane with a few extra feet of separation from high-speed traffic. (The speed limit is 30 m.p.h., but the design practically begs for speeding.)

The Atlantic Beach Bridge connects the Rockaway peninsula to barrier island. It also bans riding across the bridge. The bridge is policed by the Nassau County Police Department. The walkway is narrower than the Marine Parkway walkway… I’m not going to say you should absolutely walk your bike across this bridge, but I do!

Coming back: There’s no getting around the fact that traffic on Emmons, Neptune and Shore will be worse by the time you’re ready to come home. I’ve used Avenue T and 84th Street, but negotiating traffic that long isn’t a relaxing way to cap off a barrier-island escape. Take the NYC Ferry to get back to Bay Ridge.