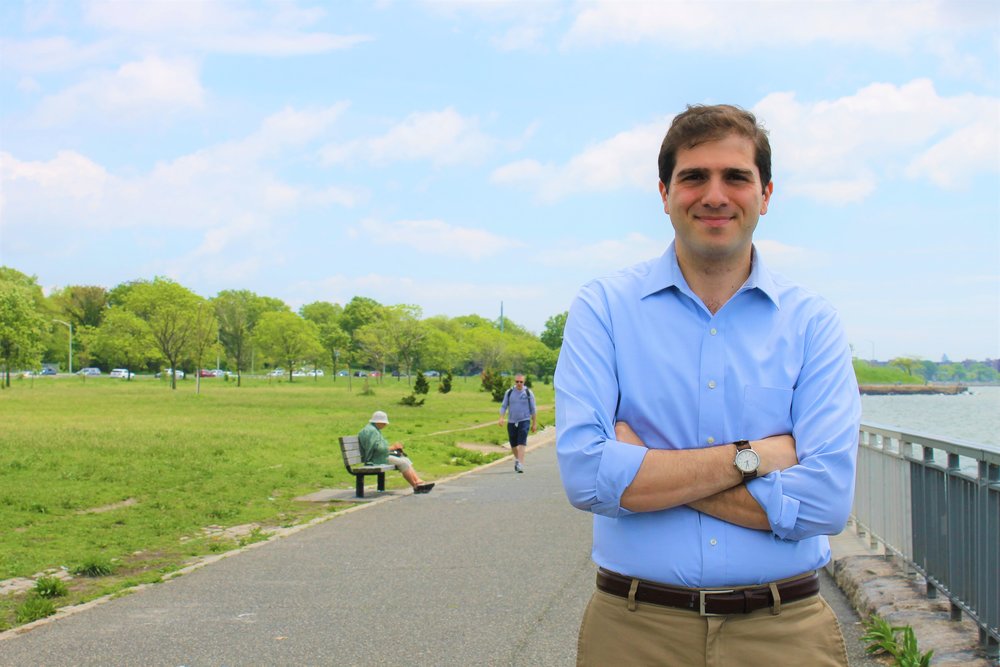 Before the Democratic primary on Thursday, September 13, 2018, for the state senate seat that represents Bay Ridge, Dyker Heights and parts of Bath Beach, Bensonhurst, Gravesend, Sheepshead Bay, Marine Park and Gerritsen Beach (presently held by Marty Golden, against whom the winner will run), Hey Ridge will run op-eds by supporters of the two candidates: Ross Barkan and Andrew Gounardes.

I first met Andrew Gounardes at a protest in front of Marty Golden’s office. It was well before Trump and well before the resistance that has swept the country and transformed the political landscape both down here in Bay Ridge and across the nation. This was back in June 2011, when Golden was among a handful of state senators who voted against marriage equality in a mostly party-line vote. Although my family and I were fairly new to the neighborhood and not yet politically active here, Golden’s stance was such a blatant statement of intolerance that when we saw a protest being organized by the Bay Ridge Democrats, we went.

This protest was a watershed for many activists in the neighborhood. To this day, I meet people who refer to this moment as the one that got them active in the neighborhood. It was comforting to know that there were people willing to show up and speak out clearly and unequivocally about important issues—and against intolerance.

And so, the following year, when Andrew announced that he would run for Golden’s state senate seat, we eagerly volunteered. We collected signatures, handed out literature, talked with people we wouldn’t otherwise have had the chance to talk with…another set of “firsts” for us. But for the all the campaigning and electoral jibber jabber, Andrew never strayed from those moments of activism and showing up.

It was at some point during the campaign when then-Mayor Bloomberg announced a budget that would have slashed crucial afterschool programs. At the school my daughter attended, there was much concern, and parents, teachers and staff mobilized quickly. We wrote letters, held meetings and showed up at a rally, one of many held throughout the city. Councilmember Vincent Gentile attended, as well as other city officials. And once again, Andrew was there.

Defending marriage equality, defending education—wherever I looked, Andrew was there, showing up for issues that mattered.

Although Andrew’s campaign was unsuccessful that year, it has left an impression on me and my family as well as on the neighborhood as a whole. To this day I remember the excitement of that moment, the importance of being politically engaged, and especially Andrew: his character, his intelligence, his good nature. After the election, he continued to organize and work in the neighborhood, most notably as one of the founders of Bay Ridge Cares, which sprung up in the wakes of Superstorm Sandy and his unsuccessful campaign. (He didn’t miss a beat.) Since then, I’ve seen Andrew at many events: the annual MLK Day walks that we’ve organized, the candlelight vigils held for DACA recipients facing arrest and a memorial for Nabra Hossanen, the Muslim teen who was murdered by racists in Virginia. I’ve seen him speak at the Bay Ridge Historical Society, where he was president. In an eloquent and erudite talk, Andrew unpacked the complicated history of the 10th amendment to the constitution, which sets forth the principles of federalism and articulates the distinctions between states’ rights and federal rights, a threshold that is invoked, it seems, with every major policy debate we have, from guns to marriage equality. I even saw Andrew at the ICE offices in downtown Manhattan when one of our neighbors was in danger of being deported, and the community came out to stand in solidarity with the man and his family.

But it’s more than “showing up”
As important as it is, “showing up” is not what recommends Andrew to me. During this primary, much has been made of “showing up”: who shows up, what they show up for, and the real and legitimate reasons a candidate didn’t or couldn’t show up. We shouldn’t judge people by that alone. Besides, there’s a cynicism that comes with campaigning that makes us wary of photo-ops and scripted answers, especially in this environment in which “alternative facts” are currency and “truth isn’t truth.” It’s not all that unusual that a politician “shows up.” We’re all familiar with those that come to an event, talk to members of the community, issue vague promises, and then bounce until next election cycle. So we have to pay attention to what they’re showing up for, but we also have to balance this with what they do and say in other places, beyond any particular protest or rally.

I’m reminded of a speech Andrew gave last year in his capacity as general counsel for the Brooklyn Borough President at the Greek-American Heritage celebration at Borough Hall, to the gathered Hellenic community, his own community. This was after the Muslim ban. This was when the Syrian refugee crisis was at its height and the image of a young Syrian boy, Alan Kurdi, whose body washed up on the beach, shocked the world. Andrew was invited to speak because of his background, as a proud Greek–American, and his many accomplishments. You can watch a video of the talk here. Andrew’s comments start at 48:40. It’s worth watching his whole speech.

It’s not just what Andrew said—which was an impassioned, moral call-to-arms during a time of fear for many minority communities—but also who he said it to: his own people. He appeals to the past that grounds that community to its accomplishments and its supreme duty to translate the principles it stands for into the present moment. It was a speech built around the principle of philoxenia, the love of the stranger. He wasn’t issuing some empty rallying cry, such as “Make America (or Greece) Great Again.” He was asking his own community to take up the challenge most immediately and horrifyingly exemplified by the Syrian refugee crisis, by the Muslim ban, by the many challenges that we face today as a nation. “We cannot forget,” Andrew said, “that we were the refugees in our own time”:

We as a community must define for ourselves a new legacy for the century that we are now living in. It is not enough for us to live in the past of previous glories of our past accomplishments. That stream is dry as the oracle would tell us. It is incumbent upon all of us collectively to create our mark for those whose time is yet to come, so that future generations of our community will look back and partake of the garden whose seed we now sow.

He put forth a vision of community that was grounded in love and compassion for the Other, but also a vision that demanded something of us all. It was and remains a supremely difficult and brave speech to give. Most politicians pander to their bases or build coalitions of shared resentment. Andrew here asked much of his community. It may seem that Andrew was calling his community out, but in a much more important way, he was calling them in.

My guess is that Andrew took a lot of heat for this speech, but this is also what makes it stand out to me, at least as much as all those times he’s “shown up.” Because this is how we all must speak to those we love, to those in our own communities, to our own bases. It’s great and important and necessary to show up for other communities, but unless we are willing to have those difficult conversations with our own communities, we are only doing half of a very big job.

Since Alan Kurdi’s body washed up on that Mediterranean shore, we have seen on our own border families being separated, under an administration that appeals to a “law and order” utterly devoid of philoxenia, as people—our own neighbors, our own politicians—remain shamefully silent or even stoke the flames of resentment.

The shores these children are washing up on are now our own. Now is the time for leadership, not for a milquetoast authoritarianism that chases its base and appeals to some mythical past where greatness supposedly resides.

I will cast my vote for Andrew and for his vision of philoxenia.

Look up where and when to vote, as well as who and what will be on the ballot, here.